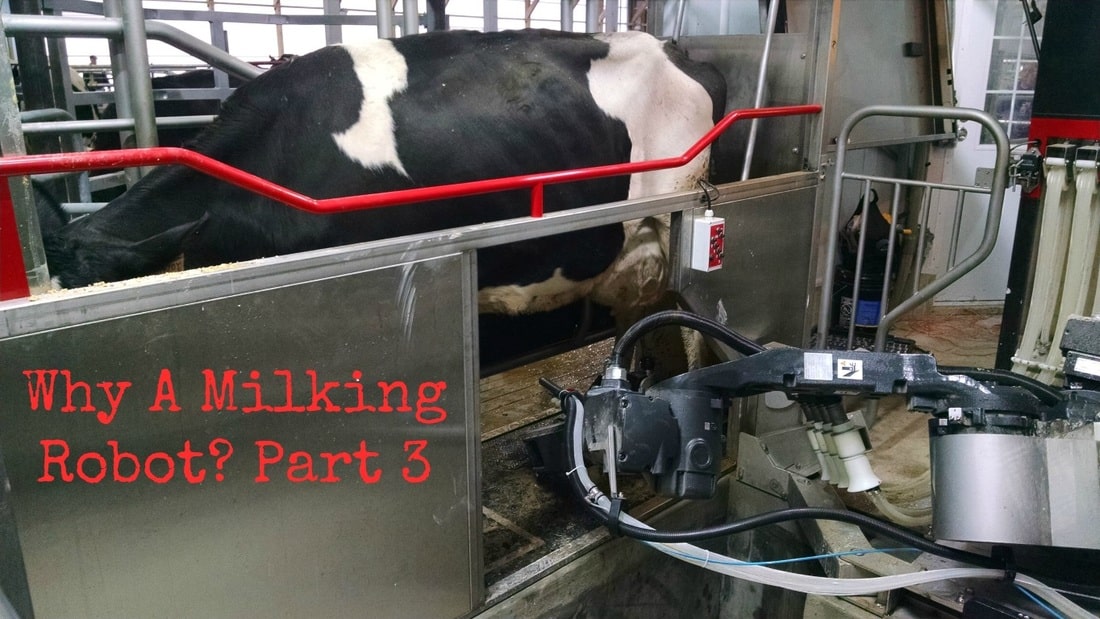 The first time we saw a milking robot in action was almost 5 years ago.  We’d just moved back to the US and Iowa State Extension was hosting robotic milking farm tours.  So 4 generations of Bolins headed out to learn about the newest thing in dairy farming – robots milking cows.  A few days later, our milk hauler asked Dan & his dad, Dave, how likely it was that they’d put in robots.  Their replies?  Dave said 1% chance and Dan said only a 10% chance!  Obviously, things changed.
Over the next year our opinion shifted as we learned more about the different management styles & routines that it takes to own & operate a robotic dairy farm.  Eventually the dial shifted from a slim chance to a whole new way of thinking about designing a new barn, routines of life, and equipment needed, all based on having our cows milked by a robot.  Dan visited a variety of farms with his dad, his grandpa, and his father-in-law.  He saw a variety of types and brands of milking robots and eventually decided on the Astrea 20.20 from AMS Galaxy USA but really that’s a post for another day. 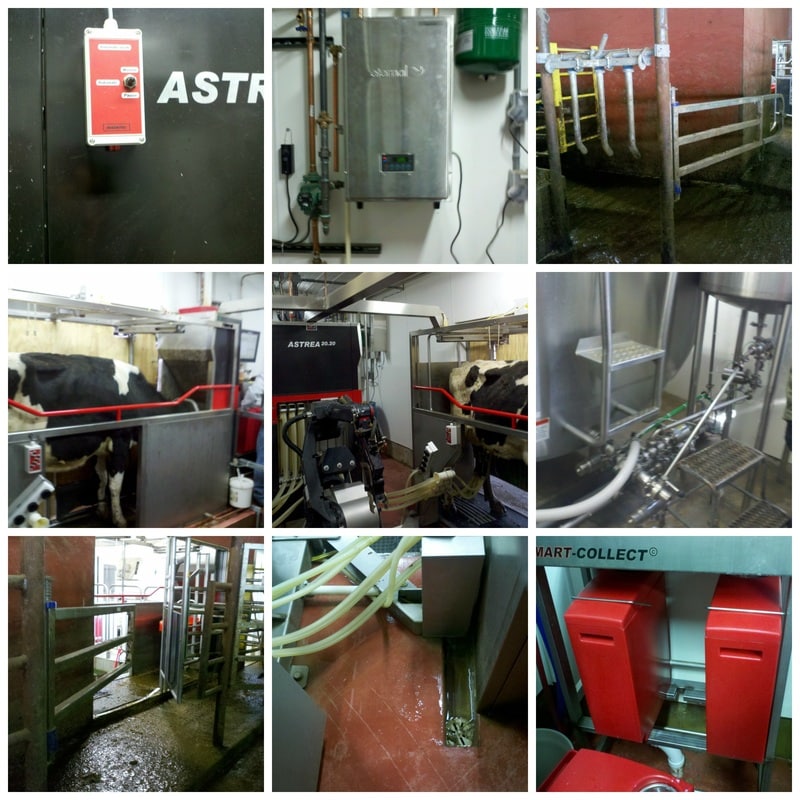 Dan always took a lot of pictures on farm tours so he could remember things he wanted to incorporate.
Through seminars, books, tours, and talking with farmers, consultants, and dealers, we learned that robotic milking is so much more than not having to milk the cows yourself anymore.   Robotic milking doesn’t mean less work it just means our work is more flexible.  We have more time to manage, focus, & care for our cows, we need less outside family labor(which can be hard to find), and as we’ve definitely learned, it makes life a whole lot more interesting!

Flexible & interesting… that’s how we often describe robotic milking.  In the past our cows were milked twice a day starting at 5am and 5pm or as close as possible to that time but now our cows can go get milked whenever they choose 24/7, which also means there can be problems 24/7.  And when Rita has a problem, who does she call?  Dan – whether it’s a pleasant 10:30am call or a wake you from your deepest dreams call at 3:30am!  Then again, Dan’s parent’s have had middle of the night calls from neighbors when the cows have gotten out, too.

And since the cows don’t need us to get milked because Rita’s helping them, when something comes up we can just go deal with it.  And on a dairy farm somethings always coming up… heifers getting out, a visitor or two stopping by, calves jumping out their huts from low flying planes, a delivery of supplies, a calf being born, or a whole lot of other options.  With a robot, the cows keep going to get milked even without us there to help them.

Flexibility also means we don’t have to hire someone or change the cows routine to go to an evening activity.  Dan’s been able to enjoy coming with us to the School Carnival and going with Miss Muffet to the Father-Daughter Dance in the evenings.  We would’ve had to have hired someone to milk the cows in the past!  When Dan wanted to be in earlier than normal for longer than normal on Easter morning for a Sunrise Service, Easter Baskets, an egg hunt, and heading to church, he & his dad just fed the cows twice the day before giving them a little extra to make it through those morning hours he might typically be feeding.  It was the same amount of work (and maybe a even a touch more) but it was flexible, meaning he could join us for a “normal” Easter morning (or at least what Pintrest & Facebook would have you to believe is normal!). 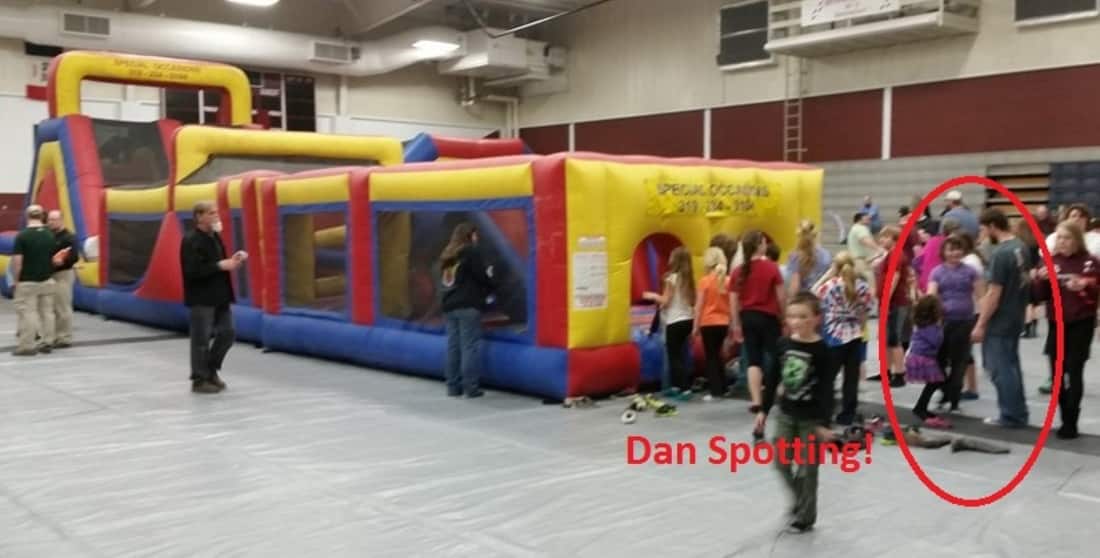 And it’s interesting work… no day’s quite the same.  Of course manure needs scraping everyday and the cows need to be fed everyday but in between who knows what’s going to happen!  It seems someone’s always stopping by – the cow’s nutritionist, the veterinarian, an genetic/semen salesperson, a maintenance or repair person, another sales person, friends or family to see the new barn, and more!

And with lots of automated machines around there’s also a lot of maintenance, well either that or repairs… and we try to do maintenance and minimize our surprise repairs!  When you’re dealing with repairs on robots interesting is a good way to describe it!  For example, just the other night Dan got a middle of the night call from Rita because three cows in a row hadn’t gotten milked quite right.  Rita knew there was a problem and had called Dan but she didn’t know exactly WHAT was wrong so Dan had to figure out that out.

At first glance everything seemed fine… all the parts were in tact and nothing was broken or cracked.  Finally he observed that one of the milking cups & hoses didn’t have any vacuum or suction, which is what helps milk the cow.  After looking under Rita’s hood he deduced that a cow must have kicked off the milking cup, which then landed in a cow pie sucking up manure instead of milk for the brief moment it laid there before Rita pulled it back to it’s holding spot.  Well manure isn’t quite the same consistency as milk so it just got stuck and the suction stopped working.  After 3 cows  not getting milked Rita called Dan.  Dan got it cleaned and fixed, got the cows back to being milked, and got himself back to bed.  If someone had been there in a traditional milking parlor they may have seen the first cow kick it off and been able to figure it out right away.  In robotic milking when you’re not there sometimes it takes a bit more detective work.

By the way, in case you’re concerned, all of the milk on our farm (and every other dairy farm!) goes through a milk filter (which we change 3 times a day) just for situations like this, ensuring that our milk stays purely milk!  Plus it gets pasteurized at our coop’s plant too!

When Rita calls with a problem, we have to fix it NOW. We don’t have until the next milking time to get it done because although Rita milks the cows around the clock for us, we or the cows can’t have her taking a break while she’s broke down.  That means we’re always on-call or need to have someone else who is on-call, just in case.

And Rita’s not the only one who keeps thing interesting!  One evening we found Freddie the Feed Pusher jumped up onto a temporary panel/gate that had gotten knocked over.  How he managed that we’ll never know, but moving him involves getting the skidloader to lift him up.  So at 10:30pm that night we got the skidloader and lifted him up & off so the cows would be able to get a midnight snack without us. 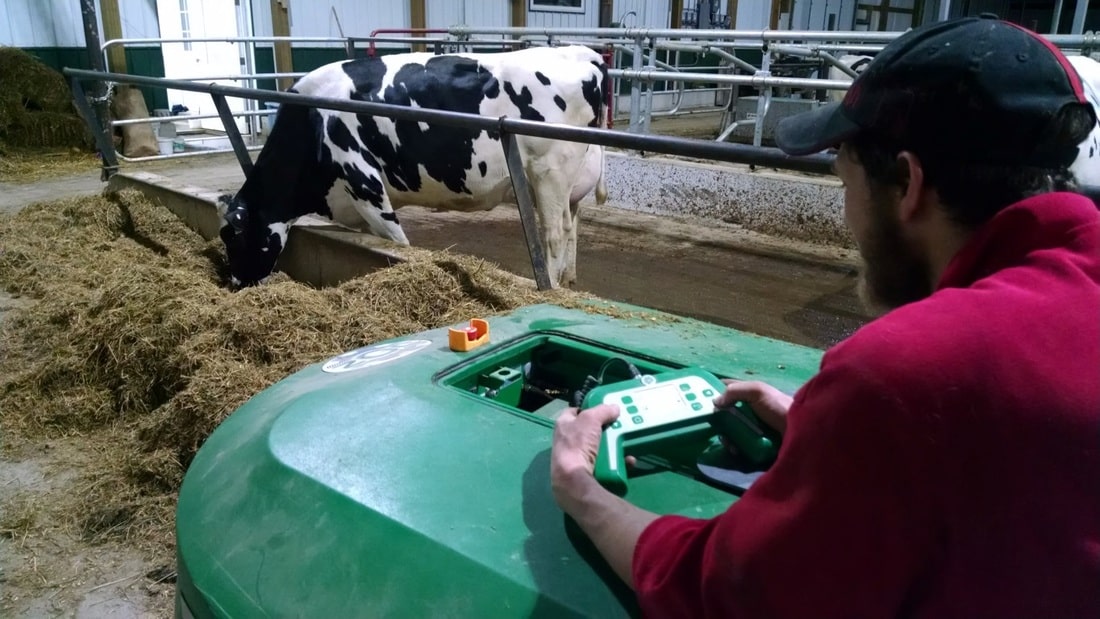 Dan rerouting Freddie around the big pile of hay.

In the end are we glad our dial shifted to robotic milking?  Yes!  We have almost every meal together as a family, as Dan just puts his work aside and comes in for family meals.  When the kids & I are trying to get off to school or another activity he’ll pop in to help us get ready to go & out the door.  We have the option to have evenings free or mornings free or whenever (the work just shifts elsewhere)!  At 5pm we don’t have to drop everything and head to the barn (although we might have to at 2:37am!).  And it adds a little, well actually a lot, of spice to life… we wouldn’t want life to get boring 🙂

PS… Do you know what song Rita sings us via Dan’s phone whenever she needs “Help!”?   What song would you pick?