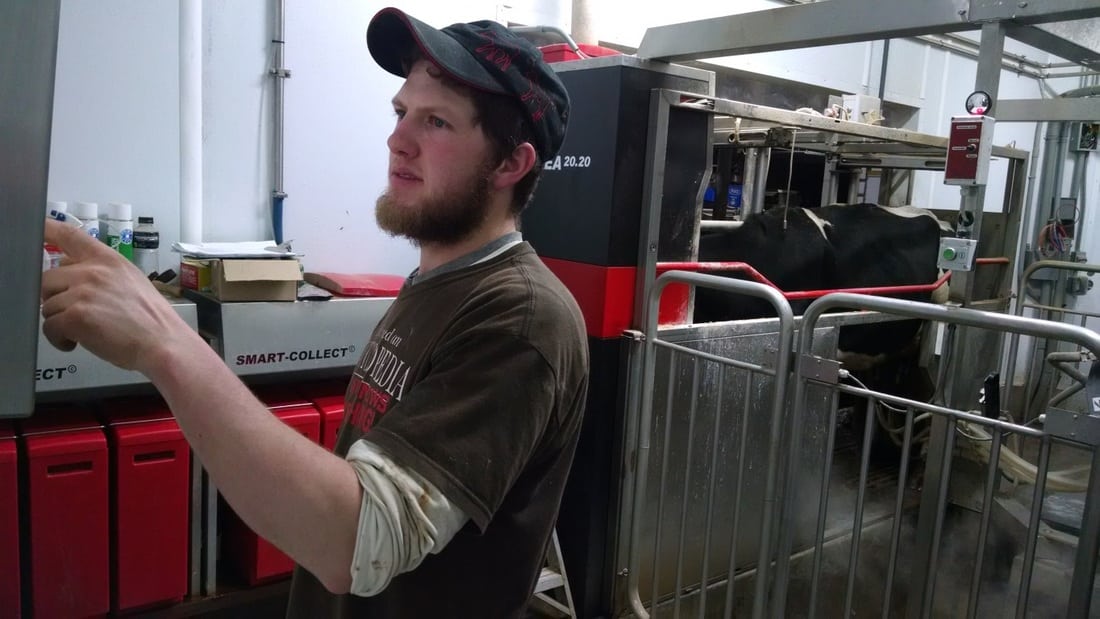 Dan checking in on the cows via Rita on the touch screen in the robot room.
Saving Dan’s health and body is one reason we “hired” Rita the robot to milk our cows but it’s far from the only reason.

It turns out Rita knows each of our cows really, really well…  but then again she only knows them like Amazon, Facebook, and your FitBit knows you, by your data.

Dan and his parents have always known each of their cows well; they are able to pick out which one is which just by looking at them (I almost always have look at the ear tag to know!) and they know their individual personalities and quirks.  When they were milking the cows, and therefore seeing them, twice a day everyday Dan could usually tell if a cow was feeling sick or if there was another problem based on how much milk she made or if something seemed off with her milk but now, with Rita’s help, he knows even more!

It’s often said, “You can only manage what you can measure”, and while management certainly encompasses more than measuring things, measuring certainly helps.  With Rita’s help Dan has many more measurements that allow him to manage & care for our cows much better than before!   So how does Rita do it?

First each cow is fitted with their own “FitBit” RFID (radio frequency identification) tag, which if you remember didn’t work when we first started!  When each cow comes into the milking box Rita identifies who she is and decides what to do next.  Depending on how long it’s been since the last time she’s visited, Rita either starts milking her or kicks her out to come back and try again later (sometimes they just want some cow treat!).

Then Rita starts cleaning the cow’s teats to get her ready to milk.  Another anatomy lesson for you… a cow’s udder actually has four separate compartments, or quarters as they are appropriately called, that each have their own teat for the milk to come out of.  So after Rita cleans those four teats, she attaches a milking cup to each teat individually to start milking.  The amazing thing is that Rita then measures the flow of the milk from each quarter so she knows when to take each milking unit off (movie below) as well as measuring how long a cow has been milking from each quarter.  She can also measuring the conductivity which is an indication of if an infection (like mastitis) is starting in that quarter.  If anything seems out of the norm (shorter than normal milking time, lower overall milk given, higher than normal conductivity), Rita alerts Dan and he makes sure to check on that cow.  In the past Dan had a general idea of how much milk a cow was making because it went into glass measuring jars before being transferred to the main cooling tank but now he knows exactly and is able to catch a variety of problems before they begin!
Another thing that the RFID “FitBit” does is measures the cows activity level… how much time she’s lying down, walking around, or standing still.  Why would we want to know that?  Well, about every 3 weeks a cow’s activity skyrockets which means she’s ready to get pregnant or is “in heat”.  We can often see their elevated activity visually but if we miss it, or don’t know exactly when it started or ended, Rita lets Dan know, which means he can help the cows get pregnant with more accuracy.

Not only does Rita measure how much milk each cows gives, she also gives each cow an individualized portion of cow treat/feed to eat while she’s milking.  When the cow leaves the box Rita can tell how much she ate (based on weight), so if she doesn’t eat enough Rita alerts Dan and he checks up on her in case she’s getting sick (you don’t like eating when you’re sick, right?).

Now Rita gives us all this data & more but it’s still up to Dan to take the time to look, analyze, and act on the information that Rita is giving him to make the best decisions for each cow… does she need to get milked again because Rita missed a teat?  does she have a hurt foot or a tummy ache & that’s why she hasn’t come to get milked yet?  does she need more to eat in the robot because she’s making so much milk?  is today the day to try & get her pregnant again?  and on and on… 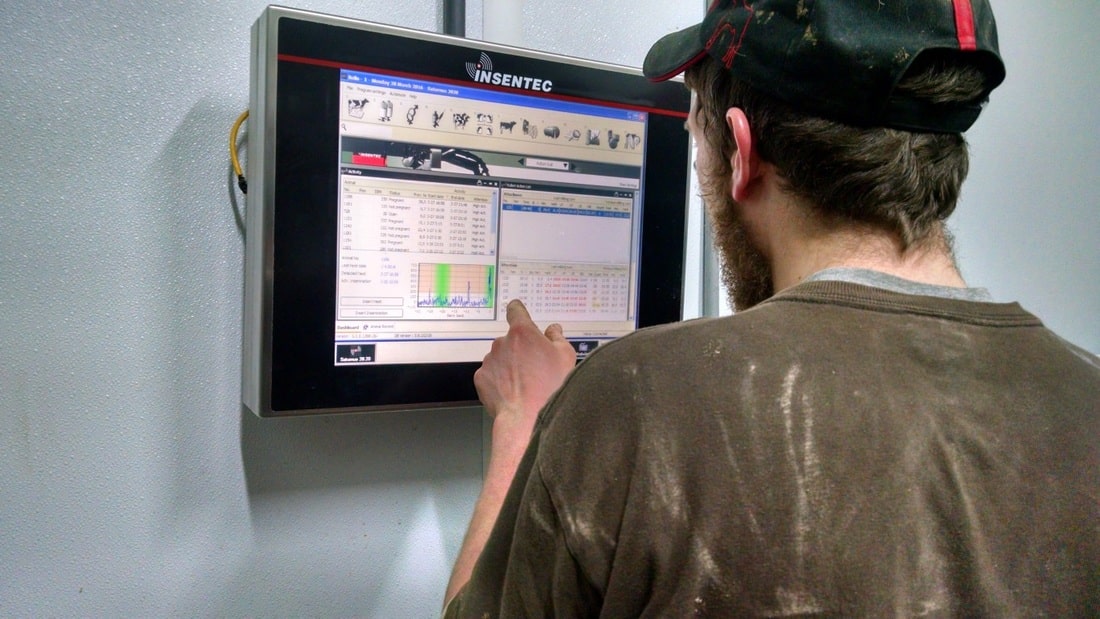 Dan checking in on things… see that graph? It’s Daisy’s activity graph.
It’s really quite amazing how much information and data there can be, and now-a-days in most every field there’s plenty of data.  Dan’s aunt visited two weeks ago and loved looking at all the data that Rita gives us because in her job at the Post Office she dealt with lots of data too.  Although at the Post Office, instead of how much milk a cow makes, her data was how many pieces of mail got delivered or lost, how fast they got to their destination, and more.

Dan’s parents have used computer programs to track the health & well-being of their cows for decades and we still track many of those things with Rita and her accompanying software (family history, birth & health records, production timelines, and more).  But now we have even more data helping us know with more accuracy how each cow is doing, meaning we can care for each of them even better!

How does information & data help you get your job done better?

P.S… Guess what?  We’ve been sharing our dairy life with you for a whole year now!  Hope you’ve enjoyed the journey as much as we have.  Make sure to stick around because we’re just getting started both in the barn and on the blog! 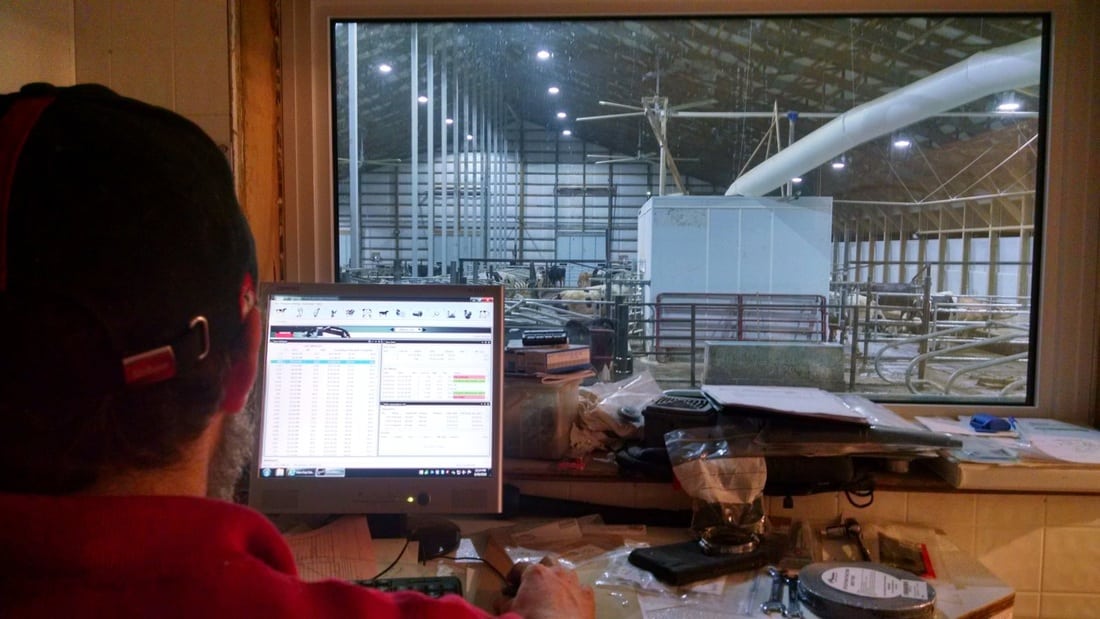 Dan checking on things in his office, which looks out into the barn.