And really that’s the perfect job for a robot to do.

So why do we have Rita milking our cows?  Let’s take a little trip back in time to answer that question, shall we?

According to Dan’s grandfather, 125 years ago when Dan’s great-great-grandma wanted milk to feed her growing family she headed out with a pitcher in hand to their cow, that’s right, one cow.  Holding the pitcher in one hand she milked the cow with the other hand right into that pitcher and brought it in to be drank with dinner or churned into butter.

As the years went by, and the next generations came, a few more cows were born and eventually there was more milk than their family could drink and there were other families in the area who wanted that milk.  So now instead of milking into the pitcher, they milked, still by hand, into metal milk cans.  Typically they separated the cream from the skim milk right there on the farm.  Then the hogs got the skim milk and the cream was picked up and hauled by horse & wagon to the local creamery to be made into butter.  It turns out that it was actually Dan’s great-great-grandfather Roy on the other side of his family tree that picked up cream from area farmers with his horses & cart (made into a sled in the winter) and brought it into the creamery.

As time continued to go by more and more families decided it wasn’t practical for them to own and milk a cow but still wanted to give their family milky goodness.  At the same time new technologies were being invented that allowed Dan’s great-grandpa to milk more cows in a shorter amount of time, meaning he could provide more families with more milk!

Dan’s grandfather, Neil, remembers when their first two automatic milking machines arrived sometime in the mid-1940’s.  He was a little boy and his dad, Adlai, was pretty skeptical.  He made sure to keep the shipping crate around for awhile, “Just in case it doesn’t work” as Neil remember’s him saying.  But work it did and our family hasn’t looked back since.  Twice a day Adlai moved those two milking machines from cow to cow until he’d milked all 17 cows, the number of stalls in the original barn.  The milk still headed into metal milk cans and then was either picked up or taken to the local creamery. 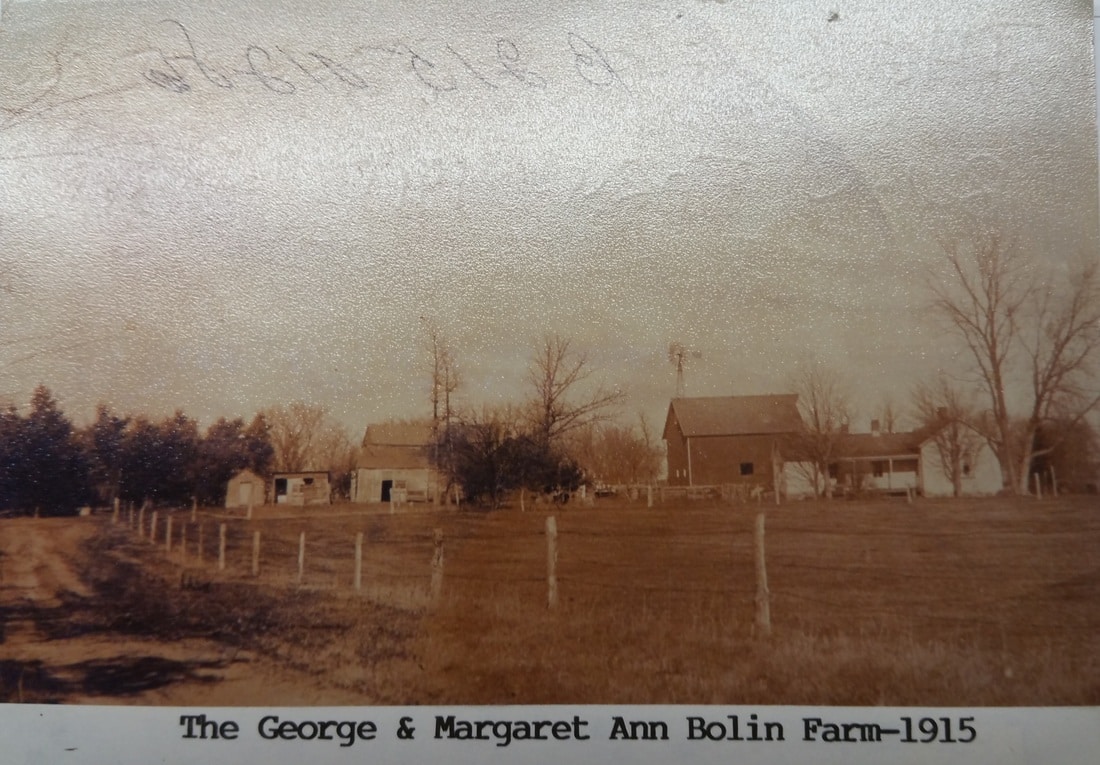 100 years later things look a little different but the original barn, windmill, and a little machine shed are still around. View from south looking north. 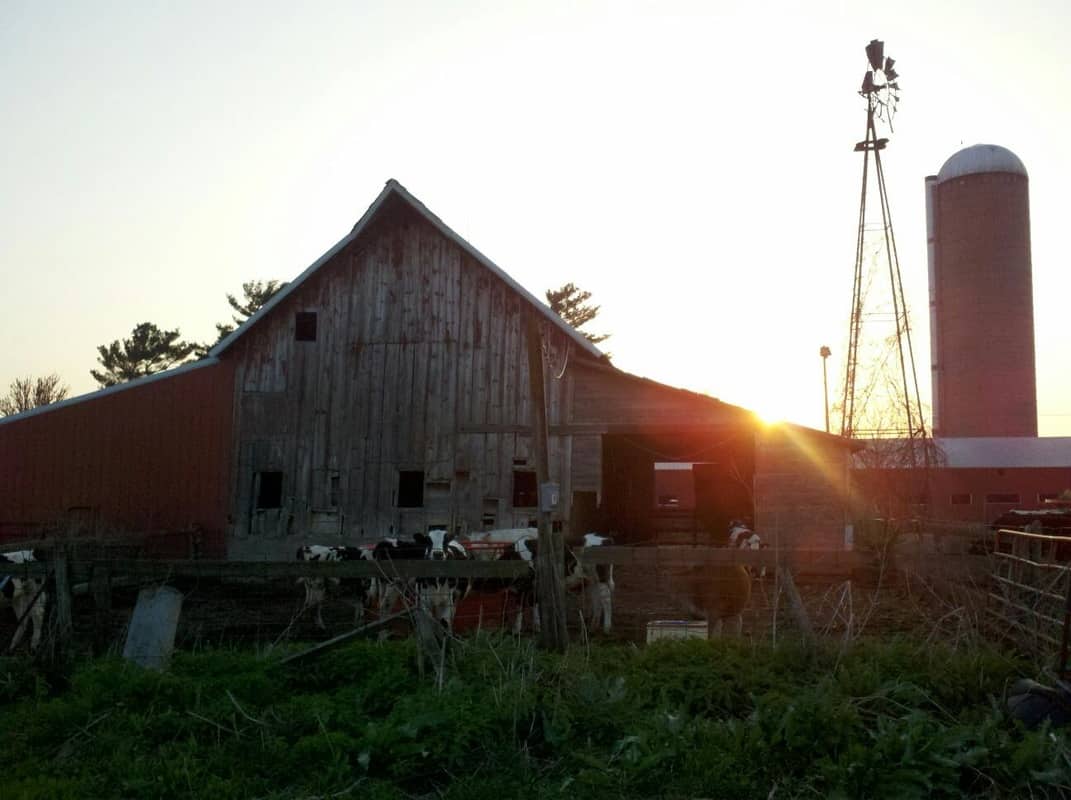 From a few summers ago, the original barn (with a few additions), still housing cattle, now young heifers. View from east looking back west.
Now for a little anatomy lesson…  milk comes out of a cow’s teats from their udder which happens to be located on the underside of their belly.  What does that mean if you’re milking a cow?  Well Dan’s great-great grandmother probably just bent over or squatted down for the few minutes it took her to get enough milk for her family but as more and more cows were being milked it mean more time bent over, squatting, or on your knees.  And if you’ve ever spent much time bent over, squatted down, or on your knees it can take a toll on your body – especially if you’re doing it over and over again twice a day every day.   So technology continued to evolve…

As more and more people wanted to buy milk and dairy products at the store instead of milking a cow themselves everyday, Dan’s dad, Dave realized he would need to milk even more cows making even more milk in a shorter amount of time (’cause we all only have 24 hours in a day!).  So in 1979 he and Pam built a new barn and a milking parlor, the room the cows visited twice a day to get milked.  The milking parlor had four milking units allowing four cows to be milked at one time and four more getting read to be milked on the other side. 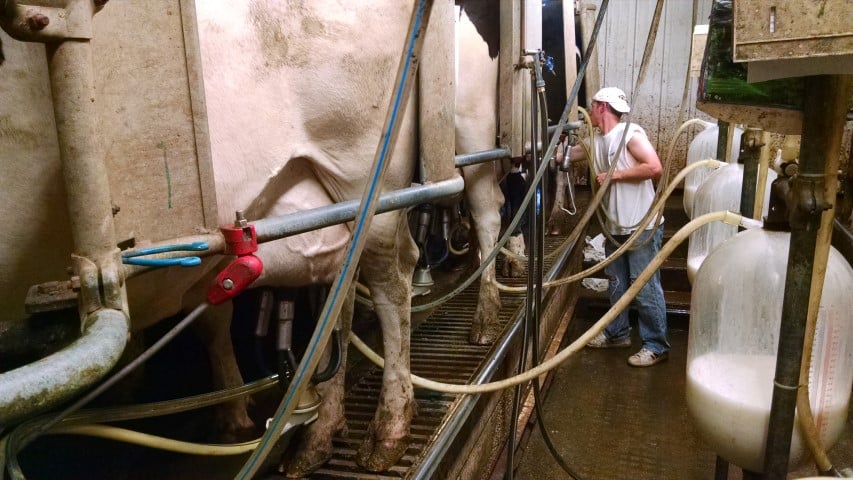 Dan’s brother James got in on a weekend of milking this summer while Dan was recovering from surgery… his last chance to milk in the parlor!
The other advantage of the new parlor?  Well, in the middle the floor was dug out lower, meaning no more bending, squatting, or kneeling to put the milking machine on the cows teats, leading to less back and knee problems.  But Dan’s parents and then Dan still had to prepare each cow to get milked and then put on and take off the milking unit of each cow, which meant rotating your arm in and out 3-4 times for 70 cows 2 times a day or over 450 times a day every day of the year.  That’s a lot the same repetitive motion often resulting in things like tennis elbow and contributing to arthritis.

And that’s one of the reasons Rita the robot has joined the farm.

It turns out the Rita can do that repetitive motion of preparing the cows for milking and attaching the milkers over and over again without significant harm to herself and if she does “get sick” or break down we don’t have to go to the doctor, prepare for weeks off after surgery, or try a variety of medications, we just fix her and get back milking the cows.

Now there’s actually lots of other reasons too… Dan has more time to oversee and care for the cows instead of spending most of his time just milking them; Rita can give us more information about each cow and her well-being than we’d ever be able to know without her; she doesn’t have attitude problems or forget to show up to work; the cows actually like the consistency of being milked the same way every single time and more but I think I’ll cover those another day.

What parts of your job  have been automated over the past 100 years?