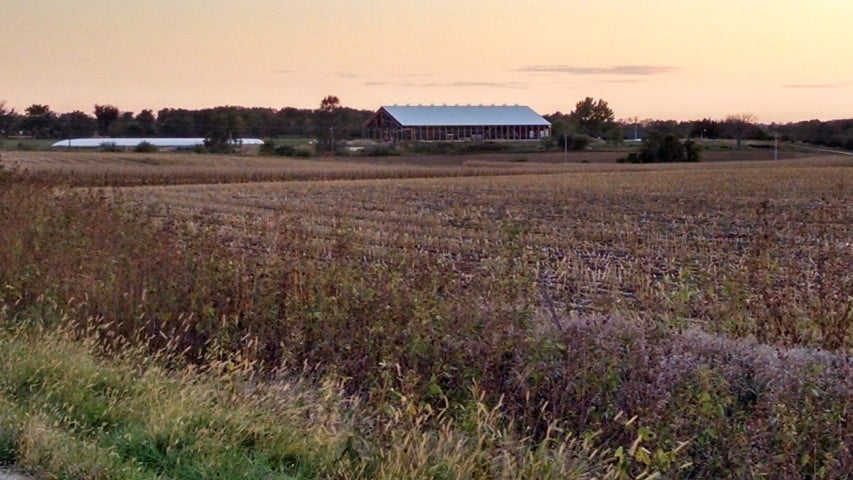 View coming from the north. You have to be intentional to get this view as it’s pretty much a dead end road…
And there it goes… another week.  Week 30 is coming really soon and that makes it seem like we’ve been doing this for a long time, which I guess we have.  I think we’re coming into the hardest part of the marathon – we can see the home stretch but we’re not quite there yet.

Let’s just say my husband is AMAZING… he’s work so hard this week and it’s only 9 weeks after getting the tendon in his ankle reconstructed!

The week started with making small squares of hay, which means those small bales have to make their way into the hay mow, and although we have a nifty little hay elevator, someone still has to load them on to it and then get them stacked up correctly in the hay mow.    I was a little nervous about Dan doing this so soon after surgery as there’s not always sure footing and he typically can do this very fast & efficiently, but doing it too fast now might do some harm to that tendon!  Thankfully he took his time and got the job done.  Monday done.

Tuesday we had a grandparent birthday party for our daughter so by the time Dan laid down for his nap I had to wake him up half way through to head up to the barn to check out how the bird net hanging was going.  Birds in a barn are not only annoying they can spread unwanted germs & destroy things like insulation, so we had our builders hang netting on the underside of our trusses to help keep the birds from making their home there.  Then Dan spent some time leveling sand piles down in the barn to make way for the concrete that arrives this week!  Tuesday done.

Wednesday through Saturday Dan’s parent’s headed to World Dairy Expo which meant he was doing it all at the farm plus keeping things going at the building site.  Thankfully our amazing neighbor came to help him finish milking at night, meaning he got home by 9pm instead of 10 or 11pm, after waking up at 3:50am, with minimal naps each day!!  Thursday I asked Dan to do a little extra and he picked up Vance to help him for a few hours while I had some friends & their kids at my place for a bible study.  Having a little helper doesn’t make a person work faster!  The kids & I helped some with calf chores both Thursday & Friday night.  We help a little but the biggest advantage is just getting to be with daddy while he works.  Wednesday done.  Thursday done.  Friday done.  Saturday done.  My husband’s amazing!

Thankfully Sunday Dan got more than a 3 hour nap, which he’ll need going into this week… concrete in the barn here we come!

In the barn this week things got ready up above for the concrete to go in down below.  The south side bird netting is up as are 3 HUGE fans… they have a 20 foot diameter.  Funny thing is they don’t even look that big in the barn…. 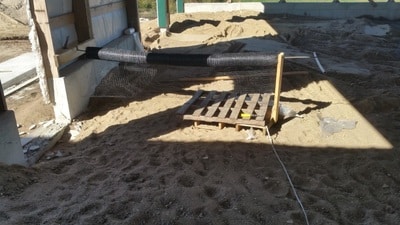 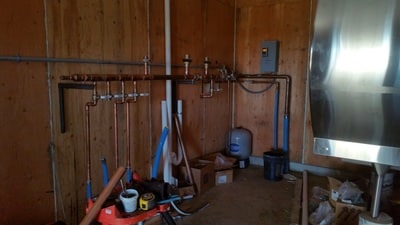 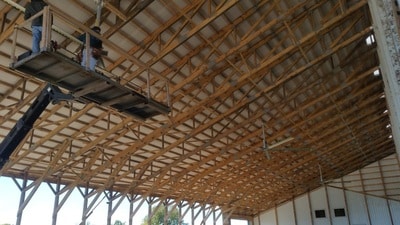 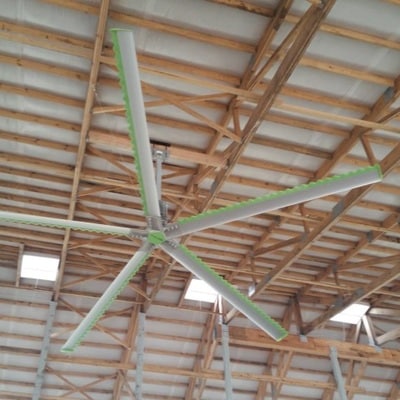 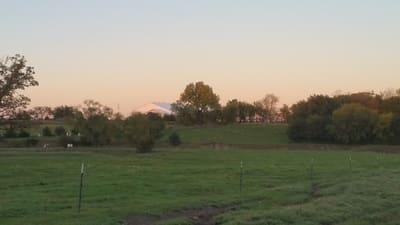 This week a lot of plumbing & HVAC went up with the start of electric in the guest house!  We even have water now, not that it’s hooked up to go anywhere in particular but it’s running into the barn!  We gotta keep things moving so we can move in before winter! 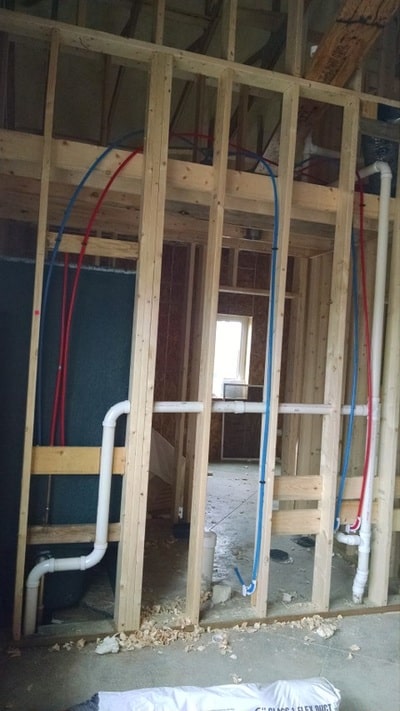 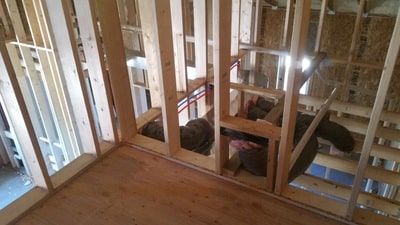 Yesterday we invited folks to come out and play in our big “sand box” that will hopefully be covered with some concrete by the end of the week .  Our kids love playing in it and we wanted to share the love.  Unfortunately life is busy these days and it didn’t work for many to come out and play (it was a bit chilly!)  but we still had fun! 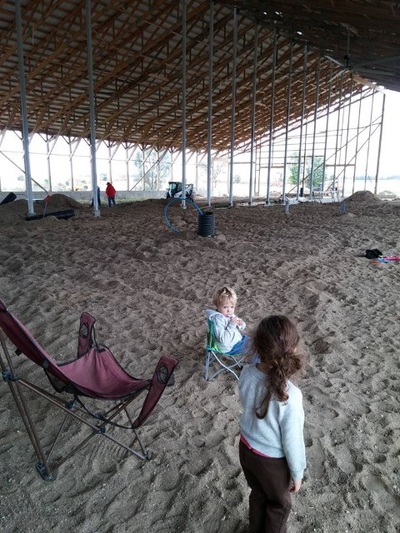 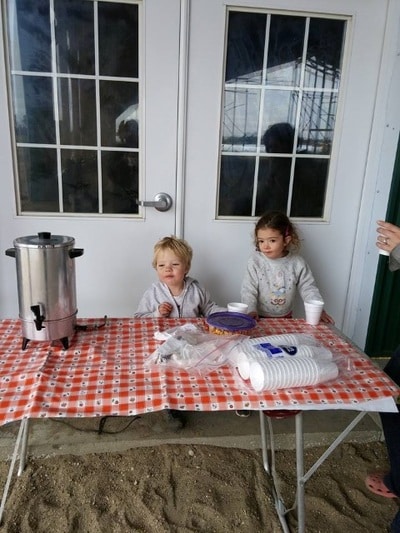 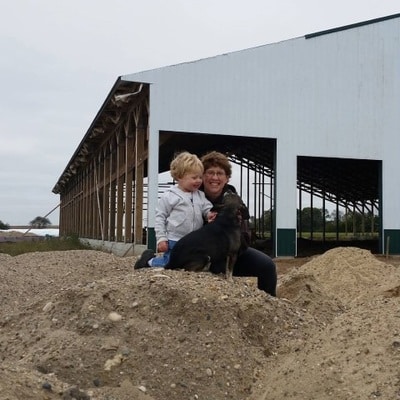 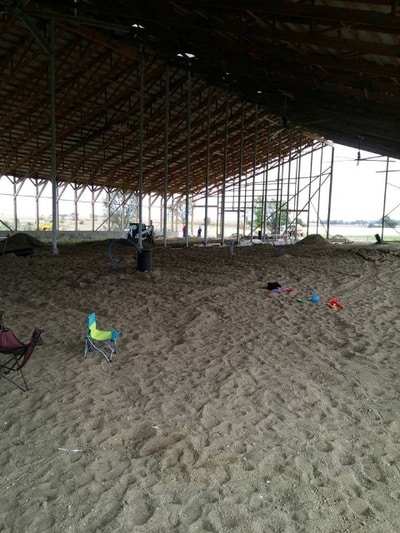 Hopefully there are some big changes in that floor this week!  See you then!