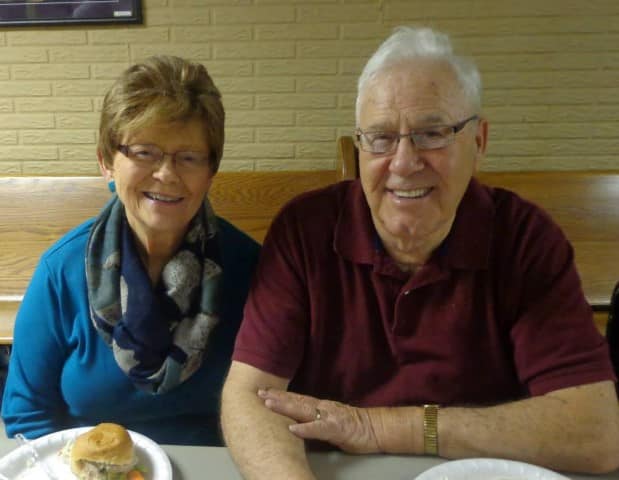 Dan’s Grandpa Pete & Grandma Mary on Pete’s 80th Birthday.
Ice Cream Month is coming to a close. Hopefully you’ve been following Dan on ﻿Twitter﻿ as he’s been eating ice EVERYDAY this month! (When you work as hard as him, you can do that!) But you may be surprised to know that Dan isn’t the biggest ice cream lover I know; his Grandpa Pete is! There is a joke in our family that Grandpa Pete & Grandma Mary would NEVER be out of ice cream at their house and we’d all be horrified if it happened!

So, in honor of Ice Cream Month I decided I’d do a little interview with the biggest ice cream lover I know.

Lynn: Do you remember the first time you ate ice cream?

Pete: No, but I do remember that in the winter my mom would hang an old one gallon syrup pail full of ice cream on the clothes line and as the wind rocked it back and forth it made ice cream. We, of course, made it ourselves in the hand freezer and it was a treat when we had it, so when we had it, we ate it!

Lynn: Any other childhood memories of ice cream?

Pete: When I was a child you could get a 5 cent cone at the little grocery stores that were located in most neighborhoods. I remember walking all over Waverly one day with my Aunt Mary to find one that was open to get an ice cream cone. We walked to 3 different ones before finding an open one!

Lynn: What about as you got a little older?

Pete: Well when I was in 7th or 8th grade my good friend and I would ride our bikes around and eventually would each buy quarter gallon of ice cream, eat it all, and then ride home. I was only about 80lbs for that much ice cream filled me up!

In high school our principal left for the day for a meeting in Ames and while he was gone there were some shenanigans that went on, so when he returned he asked who was in on it. Each time, I fessed up but no one else did. He said if I’d done it all on my own he was impressed and gave me money to go get myself a few malts at the corner drug store while the rest of the class got to stay late.

Then as I entered young adulthood, my love for ice cream was still known to those around me. While in G.I. Farm School, one of the guys was graduating and everyone was going out to the local tavern. They guys knew that I didn’t drink alcohol but still wanted me to go along so they arranged for the bartender to make me a malt instead – which made some of the other guys jealous because it wasn’t a typical offering.

In our family years we’d often have ice cream parties where a few families would all bring their ice cream hand freezers and we’d make big batches together and then of course, eat it.

Lynn: What’s the most ice cream you’ve ever eaten?

Pete: Well back in 1959, the year after Dan’s mom was born, we got snowed in for 3 days. Every night for those 3 nights, the neighbor family came over and we made a freezer full of ice cream and then ate it all.

Lynn:What do you eat ice cream on?

Pete: All of the normal desserts and fruit of course but after a trip to Ihop in Des Moines when our kids were in grade school, we started putting it on pancakes & waffles at breakfast! And now I make apple cinnamon oatmeal in the morning and put ice cream in it too! If you don’t have coffee creamer a dab of ice cream works great! And my sister-in-law always thought I was crazy but I always liked ice cream with banana jello, too.

On the first day of our local county fair there’s a big pancakes breakfast. And to this day, since I introduced it over 30 years ago, they still serve ice cream with the pancakes. The first year I did it, people told me they didn’t need that much “butter” on their pancakes.

Lynn:  Do you have a favorite flavor?

Pete: Now that’s a hard one. Vanilla goes with so many things, like pie, cake, oatmeal, and fruit, that you always need to have some on hand. As for flavors, it depends on the day and the situation but if you had to nail me down a REALLY GOOD strawberry ice cream would top the list.

** At which point Grandma Mary interjected that if she had to choose his favorite ice cream she would have no idea!

** Full Disclosure: This interview is completely true although answers are not verbatim but have been reviewed by Pete himself. Thanks!

Most kids are sure to get their first bite of cake on their first birthday, which Miss Muffet did, but Great-Grandpa Pete also needed to make sure she got her first taste of ice cream too!  Which, she wasn’t impressed with at the time, but now loves!

1 thought on “For the Love of Ice Cream: An Interview with Grandpa Pete”