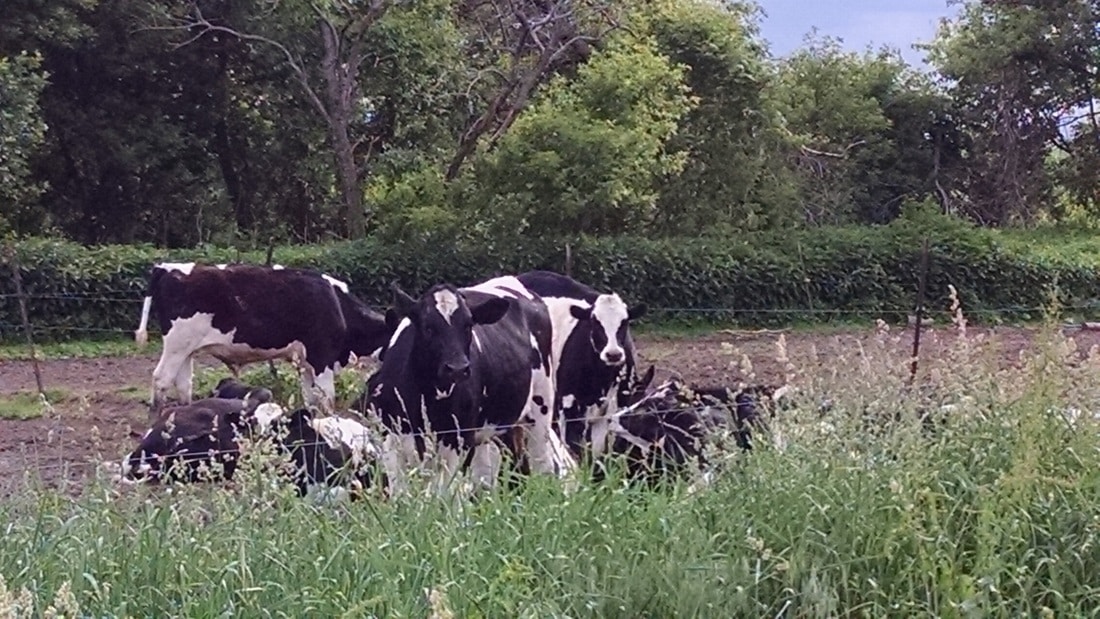 “Hey, look at those cows!”  Is that what you would say if you saw the scene in the first picture?  Turns out those aren’t cows at all.  What?  They look like cows… black and white spots and all!  Isn’t that a cow?

Welcome to Dairy 101, where we’ll be exploring the basics of Dairy Farming!  We’re starting in June Dairy Month, but I’m sure it’ll be an on going series.   We’ll start with the basics and that means some definitions of what to call all these animals we have around our farm!

So, if those aren’t cows, then what are they?  Those are﻿﻿ steers﻿﻿, which means they’re boys who got both their baby-making stuff and, therefore, their mean aggressive streak taken away.  They still have the black & white pattern though and most people would call them a cow.  By the way, did you know cows come in many different shades & colors?   These steers are actually Dan’s uncle & aunt’s as we usually sell our baby boys for other people to raise into steers.

You probably know this next one.  Those babies that the cows are having are called calves – boys or girls.  They get to stay calves for about the first year, at which point they either start being called a steer or a….

Heifer.  The girls start getting called heifers around a year, when they’re starting to get ready to have a baby (ideally around 2 years old).  I like to equate being a heifer to the teenage years, they’re just continuing to work on growing and preparing to have a calf.

Now there are a few special boy calves that as they get older are called bulls.  They get to be the ones to help make the next generation of calves.  But they do have to be kept in a more controlled area and you have to be careful around them, because it is true that they can be aggressive.    For safety reasons , we don’t have any bulls on our farm, but that’s probably a post for another day!

So, what if you want to talk about all those animals we just talked about?  What can you say to encompass them all?  You could call them bovines or more often they’re all called cattle.  And a specific group, like the around 150 cattle on the current farm, is called a herd.

Just before a cow or heifer (if it’s her first baby) has her calf, we call her a springer.  That means she’s getting close to that baby calf springing out of her!  When they’re close to having their baby, we like to check on them a few times a day in case they need help, so we often will go “check on springers”.

Now any mama out there, will tell you that having a baby usually isn’t a walk in the park and there’s a lot of transitions that take place!  That’s what this next group is called: transition cows.  For about three weeks before and after giving birth these cows often get a bit of extra special attention.  All farms have differing programs for their transition cows which can include special vitamins, a special group of beds, extra food, peppermint or some other type of lotion rubbed on their udder, and more!  At our farm, cows or heifers usually begin their transition about 2 weeks before they’re expected to have a baby by joining the…

High Cows.  High?  What are they high on you might ask?  They’re making high amounts of milk!  At our farm the cows get to hang out in two groups – the high cows make high amounts of milk and the Low Cows make a lower amount of milk.  Why, you may ask?  Well the simple answer is that each of these groups gets a slightly different mix of food, minerals, etc to support how much milk they’re making which is partially based on the place they are in this cycle.  They usually start out making more milk in the High Cow group and then as time goes on they begin making less and transition to being a low cow.  There’s a bunch of other great reasons to – maybe someday I’ll give you the longer more complicated answer!

After a cow has been a springer, transition cow, high cow, and a low cow, she finally becomes a dry cow before hopefully starting all over again!  Maybe you already guessed why she’s called a dry cow… she doesn’t have any milk.  At least 6-8 weeks before a cow is expected to have another baby, we make sure she stops making milk so she can focus on growing the baby inside of her and preparing for her next cycle of making milk!

And lastly, the saddest part.  Every so often we have to send some cull cows away.  Because we do have to make a living from milking our cows, we do have to analyze our cows to determine if they’re paying their way – are they making enough milk to offset their costs of food, shelter, and care?  Eventually they no longer pay their bills and we have to say good-bye.  We send ours off for others to buy either to try making it in another barn and herd or to end up in the beef supply… and that’s probably another can of definitions to open (that I have no clue about!).

So the next time you’re driving down the road and see a group of cattle or a bovine in a book, don’t assume it’s a cow – it might be a steer or heifer or even a bull!

Do you have funny terminology in your industry that other may not understand?  What is it?

* And just so you know I did have this post checked & reviewed by my father-in-law, who has a degree in Dairy Science (did you know you could get a degree in that?)