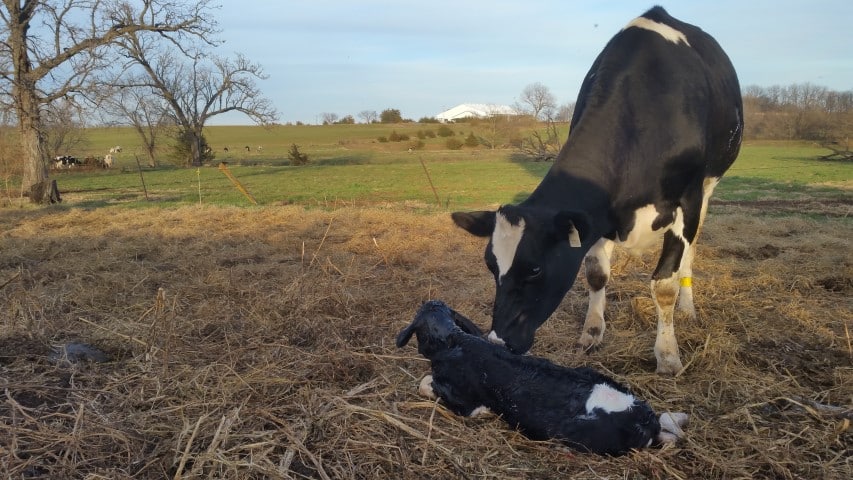 A little reminder that first & foremost we’re dairy farmers… NewStar was born Monday.
A lot of concrete and drywall… that pretty much sums up this week although there was a lot more than that.

Our concrete crew worked long days trying to beat the falling temps and they were rewarded with popcorn balls on Friday afternoon!  We like to bring treats to our crews to keep them going and let them know how much we appreciate their hard work!  I wish I had a picture of Miss Muffet handing them out, she was pretty proud!

They got the maternity pen, some crossovers, the pre-fresh stalls, the area around the robot room, the last part of the west alley and the north alleyway all poured.  It’s a lot of work to get everything just right and then to weld together all the rebar (to hopefully avoid stray voltage). 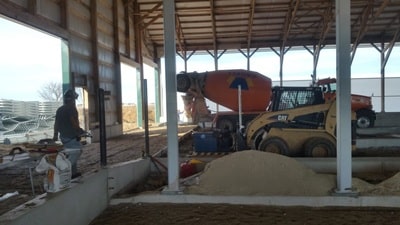 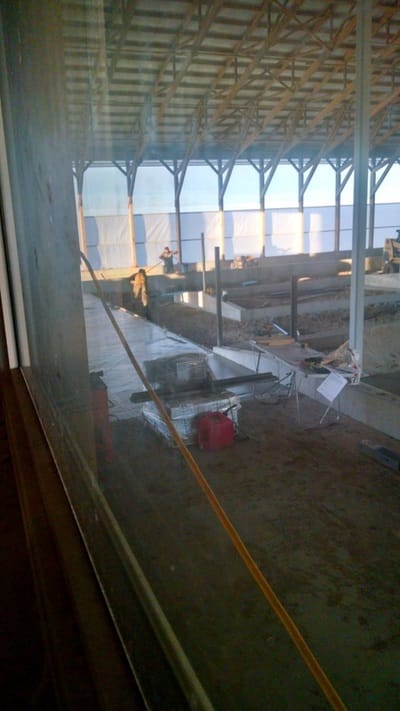 Smoothing out the Concrete 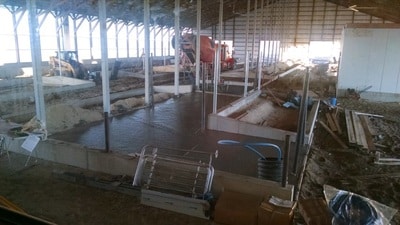 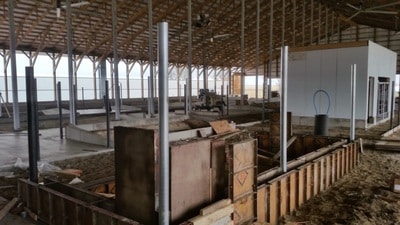 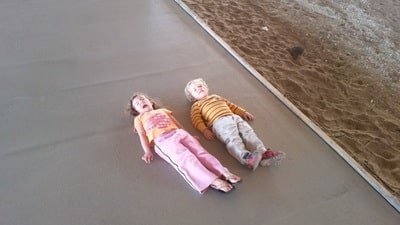 They won’t be able to do this later! 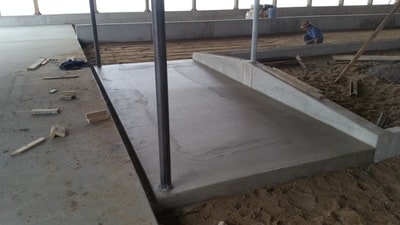 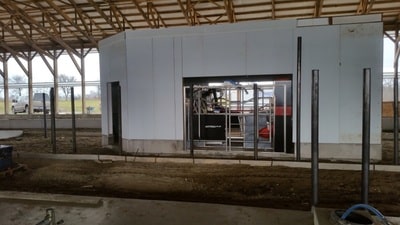 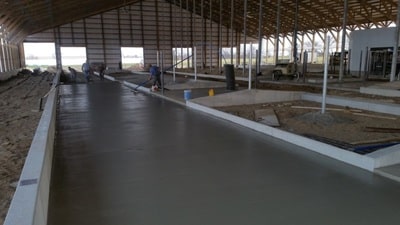 The biggest pour yet… 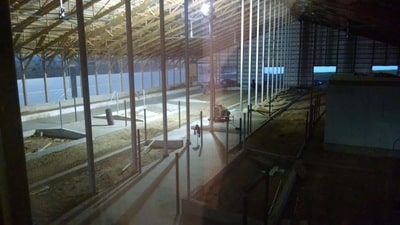 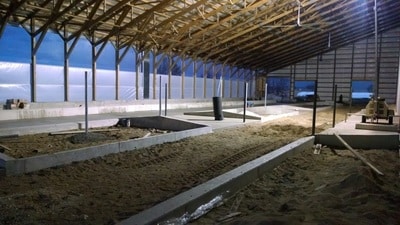 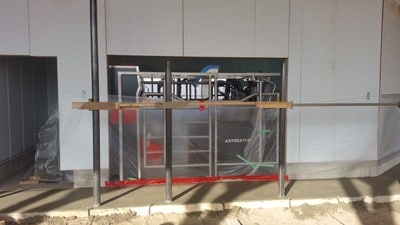 Those poles are there to stay…. 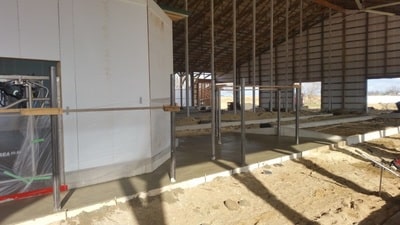 Our barn builders finished up the east wall and the robot room at the beginning of the week and will be back to put the final finishing touches on things once a lot of other things get finished up!

Dan had the robot’s “hood” open a few times this week doing work or showing it off to someone, so of course, I snapped a few pictures!  I have NO IDEA what any of that does… someday I’ll learn and let you know. 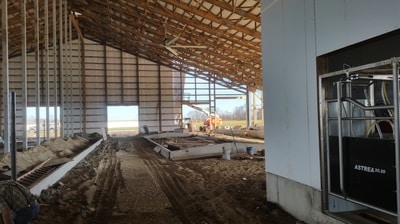 Finishing up the east wall 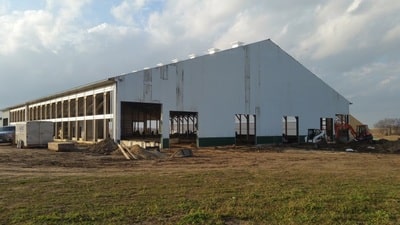 Now we need another big rain storm… from the east. 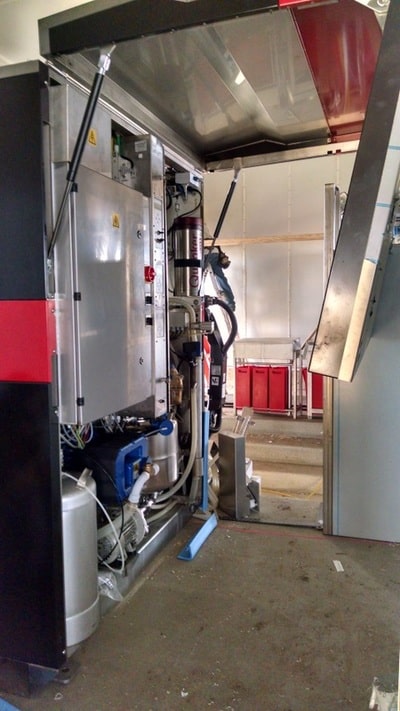 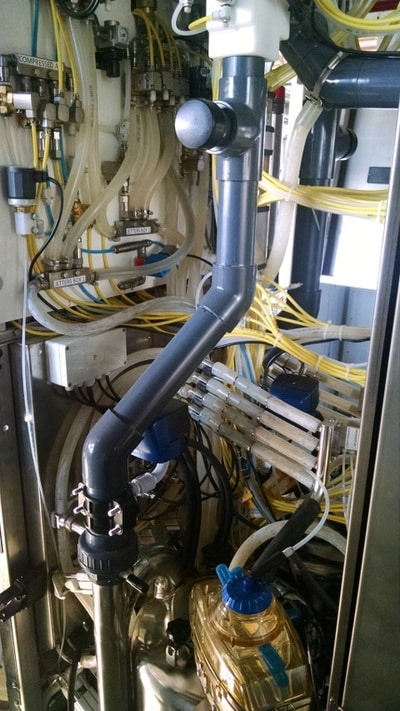 Inside the Guest House the drywall finished going up and taping and mudding started.  On Friday they put on tile board panels in Dan’s office so we can start installing the computer pieces needed to communicate with the robot!  We’re putting tile board in the entire mudroom, mud bath and Dan’s office so it’s easier to clean. 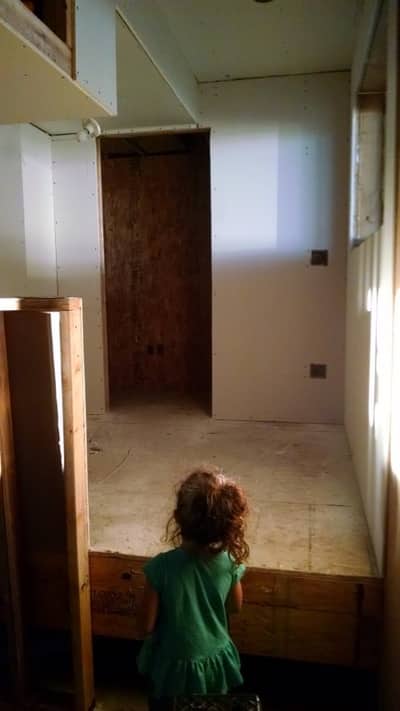 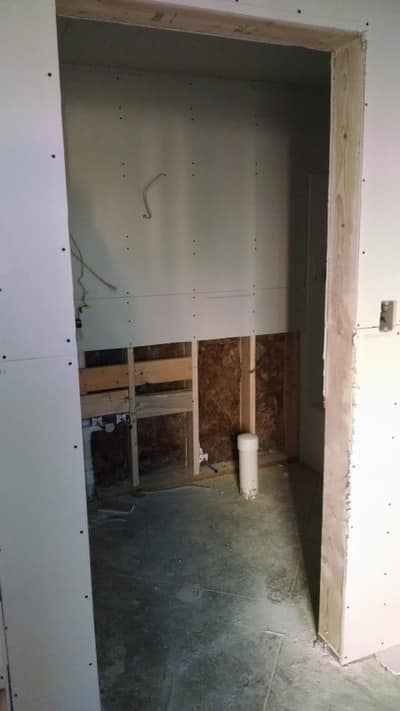 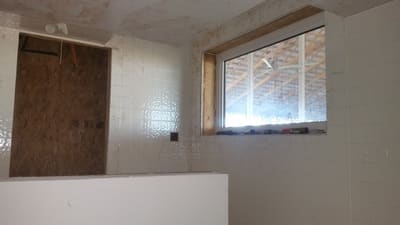 Tile board… obviously we already need to wipe it down 🙂
We’ve continued to have visitors, which we love.  Dan’s been spending most of his days at the barn so he usually catches them.  I forgot to post that Dan’s friends from the band, The Elim Arrival, visited after they put on a concert in conjunction with a hayride our church had.  This week on Monday one of Dan’s college friends stopped by after an appointment in the area.  And then Dan’s aunt came out with his grandparent’s mid-week.  And our great neighbor who had been helping us out SO much milking the cows also get a tour this weekend, which was obviously long overdue!  I suppose you should visit soon if you want a shout-out on the blog as I probably won’t keep noting everyone that stops by! 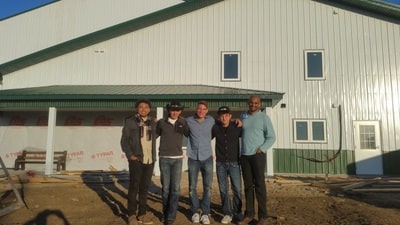 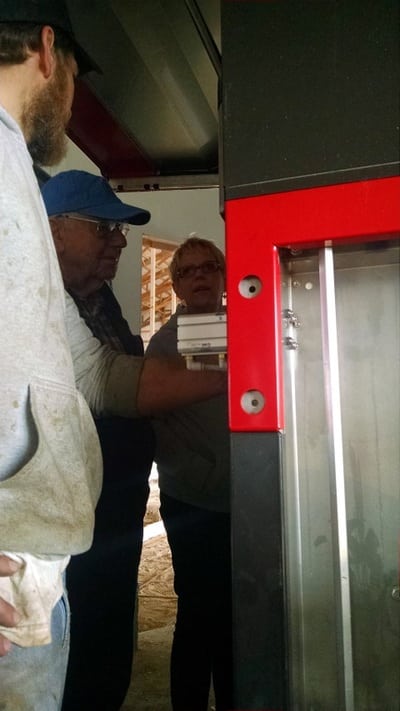 Getting and explanation of the insides…
We also had the boiler for the in-floor heating go in as well as more electric lines & lights as well as the lights for the barn being delivered.  And then there’s always people like the state dairy inspector, our coop’s field rep, our nutritionist, a rep from the company that engineered the barn (EPS Buildings), and more that come by (that’s only the ones I remember Dan telling me).  There’s never a dull day!   Dave & Pam got back mid-week so they also came up to see the progress and take some pictures (included above)!

The installers to install our robot and get it up and running arrive Sunday night for an early Monday start planning to work long days getting the robot all ready!  The pace just keeps heating up!