At the end of another week, I feel so silly that last week I thought it had been a crazy week, because the crazy just got more intense this week… Dan was still recovering, dogs attacked some of our calves, we threw in VBS which I & Pam helped with, and I still did calf chores & checked-in at the building site, as well as “normal” life things like tumbling class and a run to Walmart, along with a couple nights early on with interrupted mommy sleep again!  Thankfully we have an amazing support system with our parents, grandparents, & friends, thank you!

Now you may be wondering then, why blog if you have so much going on?  Well, it’s for you and, really, it’s for me too.  I want you to be able to follow our journey, I want to be able to look back on it and remember, and I want others in the future to be able to experience our process too!  So here we go with this crazy week…

Off the big pain pills and feeling better and more antsy, Dan made it up to the building site 2 times on Friday and again on Saturday, when he proceeded to climb a ladder to the loft (yes, I’m not sure that was in his doctor’s orders for this week!).  Being patient with recovery is only going to get harder now!

The walls in our Guest House space went up quickly and dramatically since we used SIP panels, pre-made insulated panels that you put together like a puzzle.  I missed going by on Tuesday (remember, it was a crazy week?) and so it changed a ton from Monday afternoon to Wednesday afternoon. 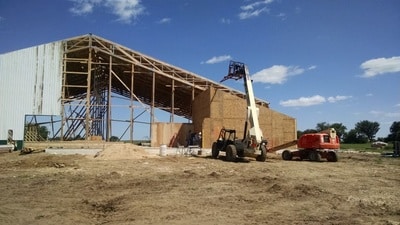 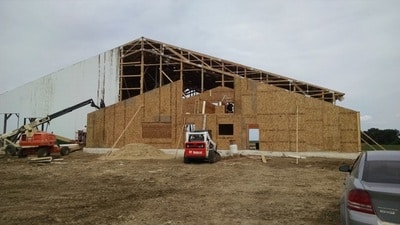 By Wednesday, all the walls are almost up! 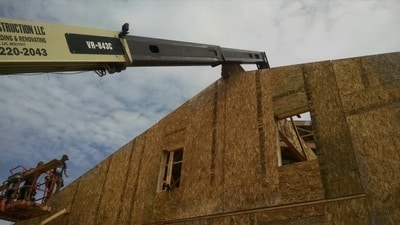 The HUGE header that will keep our roof up! 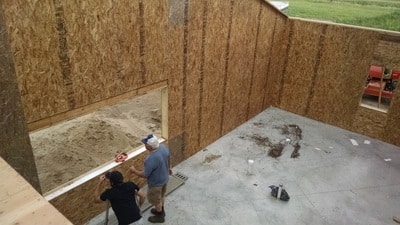 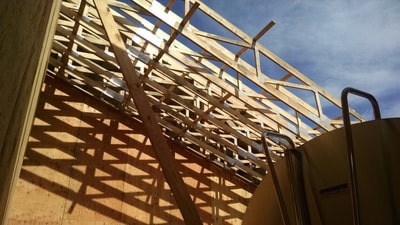 By the end of the day Friday about 1/4 of the trusses were set. 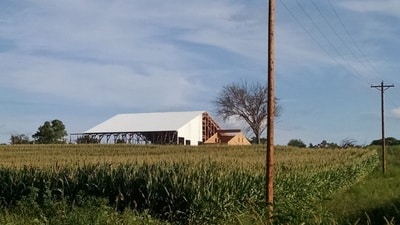 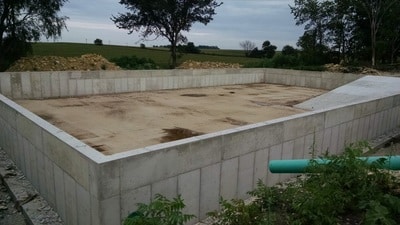 Checking in on the Manure Storage 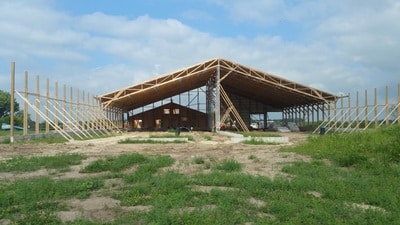 View from the east end. 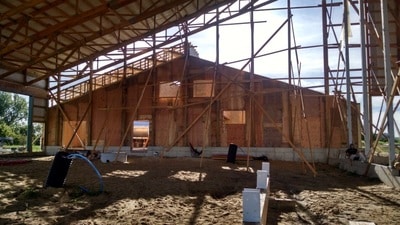 View of the Guest House from inside the barn
And this truly is a team effort!  When I stopped by on Wednesday I had to solve with the construction crew where to put a piece of equipment that had arrived.  Dan’s Grandpa Neil was there and had the winning idea, which was good since it was so much simpler and better than what the rest of us thought!  Which calls for a shout out to our building crew who has taken on some extra tasks with Dan being laid up and not being available as much to take deliveries at the site, etc.  We are so blessed!

We had lots of visitors this weekend!  My mom stopped out again before heading home.  Dan’s brother & sister-in-law were here for the weekend, and his Uncle & Aunt were visiting too, and we didn’t get to visit at the same time but his cousin also stopped out with his Grandpa Neil!  It’s getting more exciting!  We love to share it with people, as that’s one of our big goals through the whole vision! 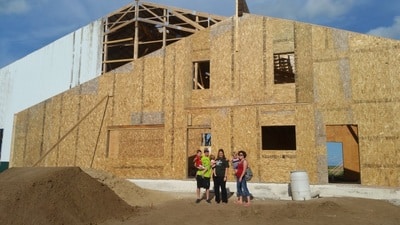 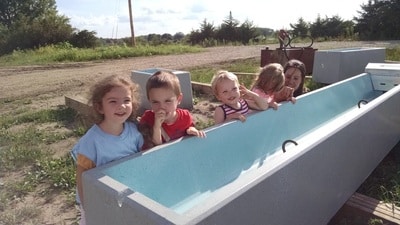 Pretending to be cows drinking! 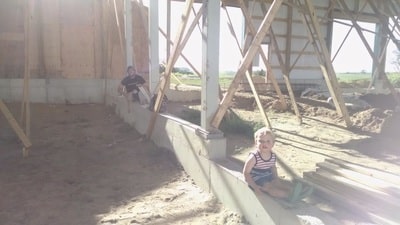 Chillin’ with dad in the barn waiting for our next guests! 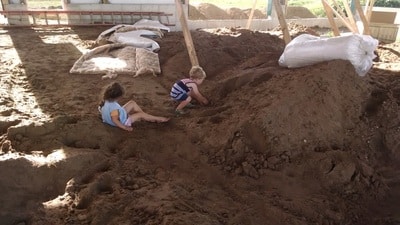 My sister-in-law remembers playing in the sand in a family friend’s barn while they were building! 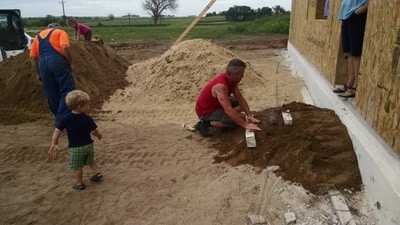 Even the big kids play in the sand (or make steps!) 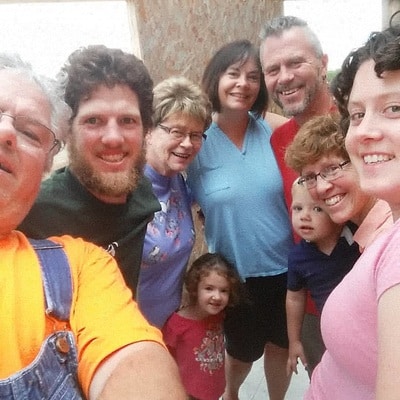 Group Selfie – Grandpa was out with the skid loader.
The views from the loft are amazing!  Iowa is truly beautiful.  Right now it’s the full green fields finishing our their growing cycle until harvest, when the colors will start turning into reds, yellows, and browns.  I took a few pictures of just the views when I climbed up to the loft on Friday but Dan’s dad took some when most everyone (including yes, Dan & the kids) climbed up on Saturday and those are more interesting because they have people 🙂 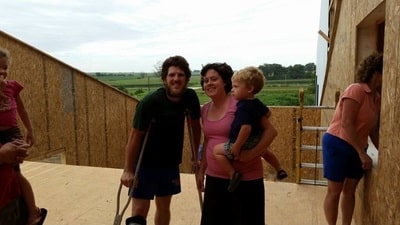 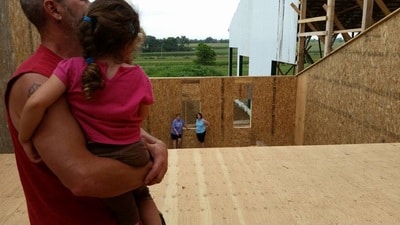 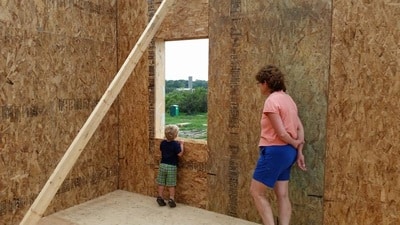 Can you see the current farm? 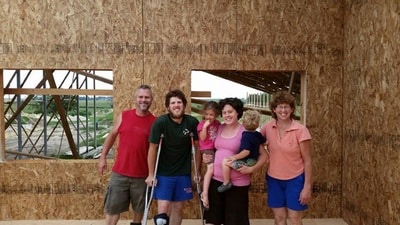 Two windows into the barn! 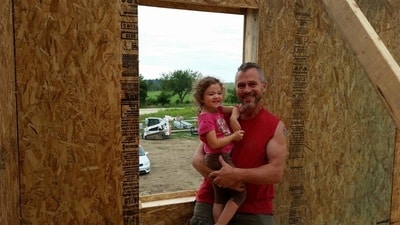 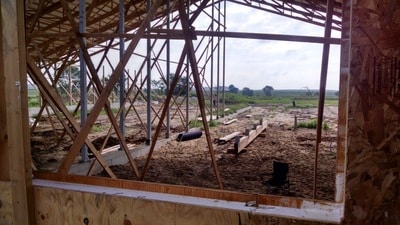 The view into the barn!
And as I mentioned above we did have some dogs attack our calves mid week.  It hasn’t ever happened before and I know my in-laws (and us!) hope it never does again.  When I finally showed up to do calf chores, they’d already had a long night of searching for calves and an early, early morning call to the vet.  For most of the morning we still had one missing calf but finally about noon Dave found her hiding in some tall grass.  I’m pleased to say that  the two calves that were injured most are doing much better now and hopefully will have a full recovery! 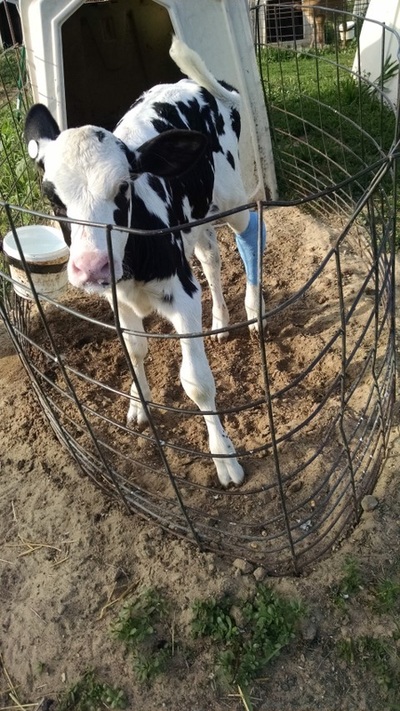 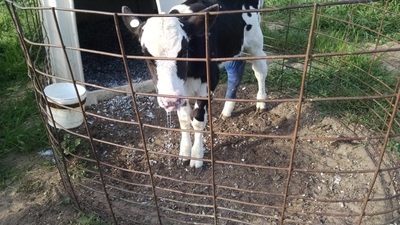 Hopefully this week will be a little calmer, although without my mom here it’ll probably stay a bit crazy because Dan is in charge of the kids while I’m doing chores and although he can help them with a few things he mostly can keep them entertained and alive while I’m gone 🙂  As we look toward our timeline, I would say our goal now is to get in and started before Thanksgiving! We shall see, we shall see… thanks for taking this journey with us!