If you’ve been following on Facebook or﻿ Twitter ﻿or have just heard it through the grapevine, Dan had ankle surgery bright and early on Tuesday morning.  Thankfully the surgeon said things went well and is hopeful that Dan will be able to use the tendon he severed during a camping prayer retreat back in February.  (It just took this long for all the medical hoops and tests and appointments to be gone through to finally get it fixed.)

We only had about a weeks notice to get prepared from when it was scheduled since we wanted it done as soon as possible, as these next 6 weeks are the best 6 weeks for him to recover both from a building project stand point and work at the current farm.  A big thanks to Dr. Greg Lantz at ﻿Family Foot Health Care﻿ who opened up a spot for him to have surgery as soon as possible, knowing this was the window of opportunity.   A HUGE thanks goes out to his parents, my mom, and our various neighbors and friends who have been helping (and hopefully will keep helping!) as Dan recovers.

I’ve been helping with calf chores at the farm for about 2 hours in the morning and evening each day, which will warrant it’s own post at the end of my 6 week experience caring for those calves full-time!  And since Dan’s still on the loopy, drowsy pain meds I’ve been taking calls, dealing with questions, and trying to keep things moving along at the building site.  Another big thanks goes out to all of those who have been gracious and helpful to me as I’m helping get things figured out!

And then of course, I’ve been Dan’s nurse which means making sure he gets his pain meds every 4 hours even in the middle of the night…. and hoping the kids don’t wake up in between those 4 hours so I can get 3 hours of solid sleep…. I think it’s happened once so far 🙂  Anywho, if this post seems a little off, it’s because I’m a tad bit sleep deprived at the moment!  Thankfully unlike having a baby who wakes you up multiple times in the middle of the night, I know this should end soon, prayers to for healing, ending of the pain, and sleeping kids would be appreciated!!!

So you probably want to know what actually got done this week… here it goes!

The week started out with more steel going on the front of the barn… it obviously will need to be power washed!  The concrete guys finished up a few little things so that the building crew could start putting walls up on the milk house and the guest house!  Friday morning the bulk tank arrived, which means they can close the milk house and guest house in and we can start working inside! 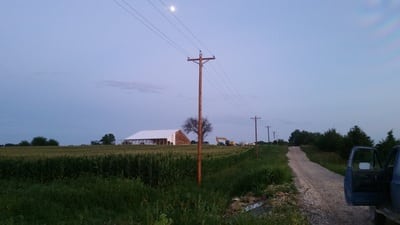 Dan’s last view of the barn on Monday evening. 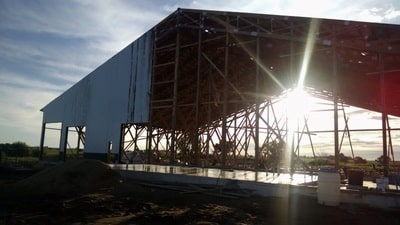 Wednesday morning before I headed to do calf chores. 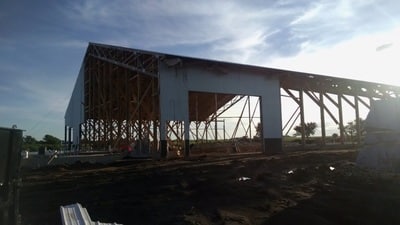 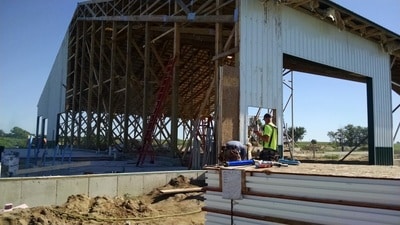 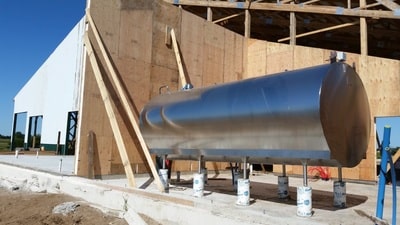 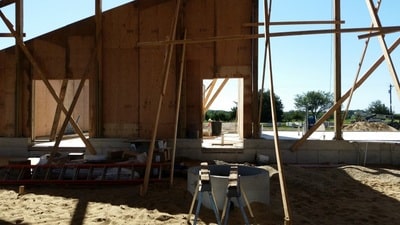 A view from inside the barn into the milk house. 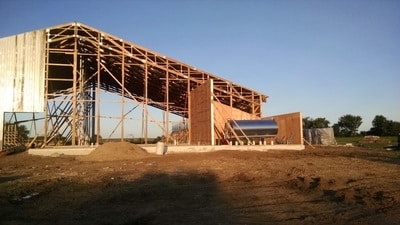 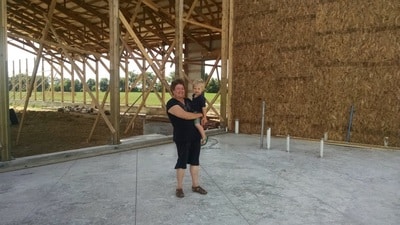 After a hard week of work looking after the kids, my mom finally got to go see the progress!
Here’s what Dan’s been up to…  Be watching for a 31 days of ice cream wrap up post later this week!